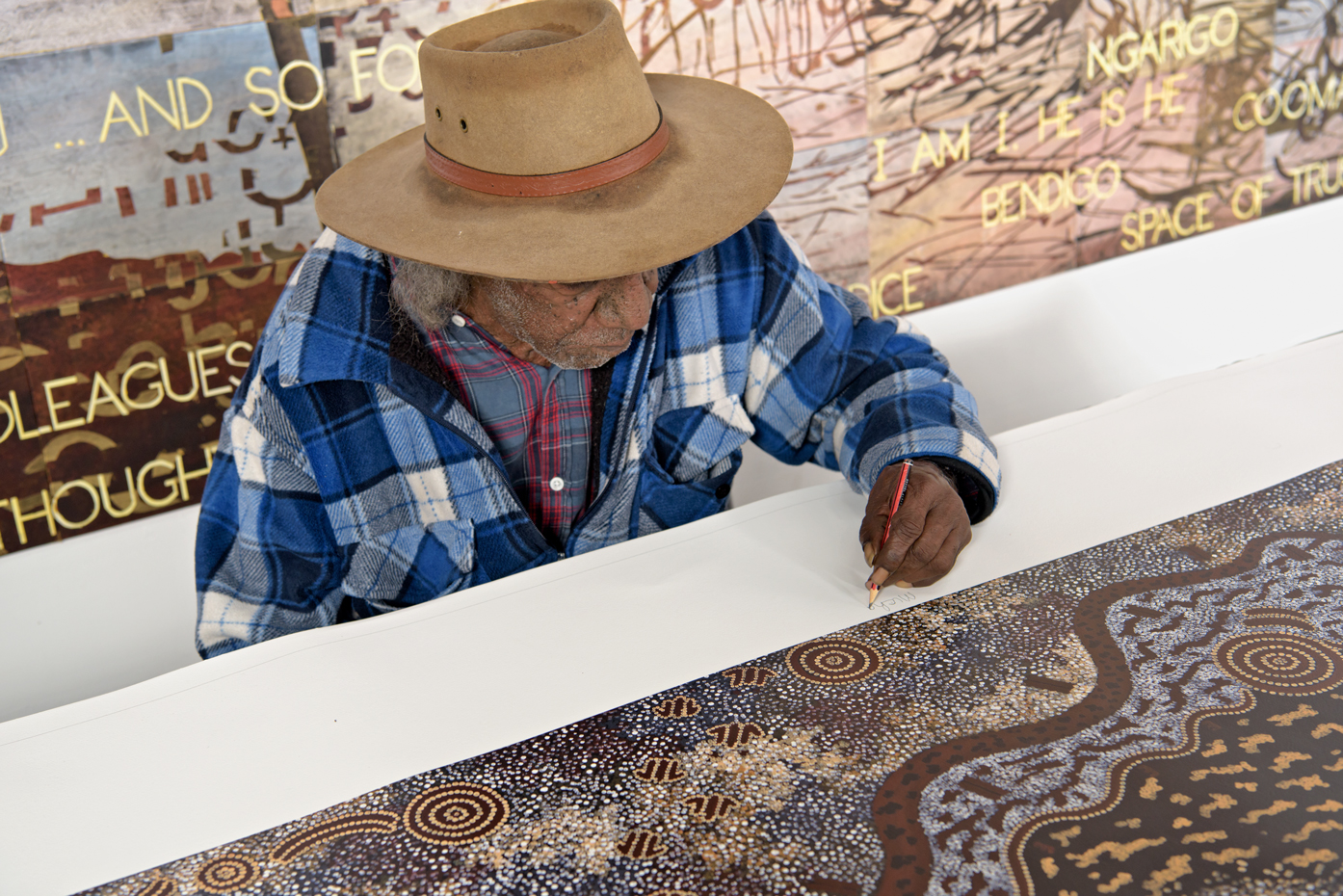 In September 2016, a limited edition reproduction print was produced in Brisbane to commemorate the record auction sale of Jagamara’s seminal work Five Stories.

Jagamara travelled from Papunya to Brisbane to sign these prints. 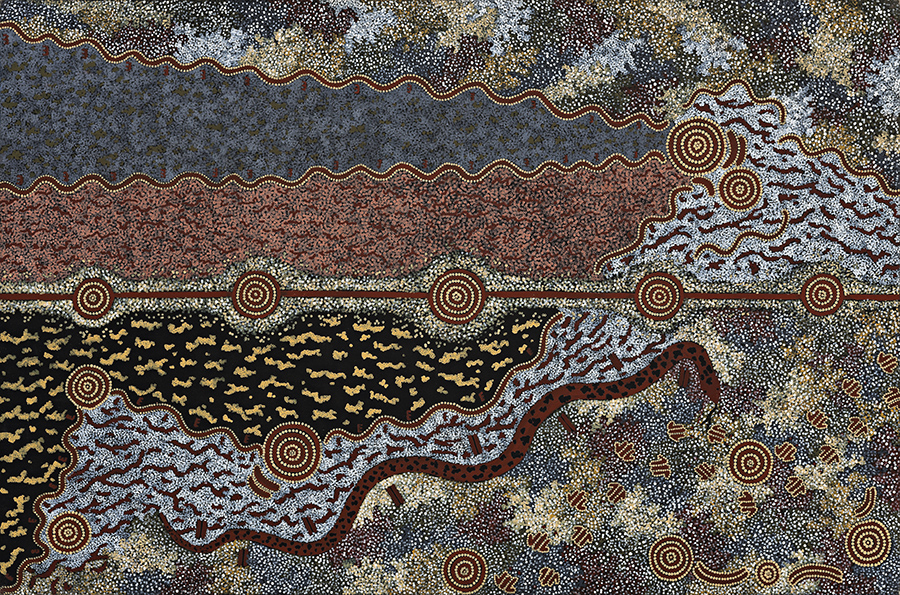 Michael Jagamara Nelson’s painting Five Stories of 1984 is one of the iconic images of modern Aboriginal art. It has been published and exhibited widely, possibly more so than any other work by an Indigenous Australian artist. During the 1980s and 1990s Five Stories featured in several landmark exhibitions in Australia and abroad at a time when Aboriginal artists were breaking through the barriers that had consigned their art to the ethnographic domain to emerge as part of the discourse that is the world of contemporary art. Five Stories was among three works by Jagamara selected for the 1986 Biennale of Sydney, origins, originality + beyond. This was the first time Aboriginal artists were represented in the Biennale. It featured on the cover of the seminal exhibition Dreamings: The Art of Aboriginal Australia organised by the South Australian Museum and shown at the Asia Society Galleries in New York in 1988. The high profile of this exhibition introduced a new set of international collectors to Aboriginal art and initiated a debate as to its place in the continuum of contemporary art worldwide. Similarly, the exhibition Crossroads–Towards a new reality mounted at the Museums of Modern Art in Tokyo and Kyoto in 1992 established a place for modern Aboriginal art in Japan. Five Stories was one of the key works in the highly acclaimed exhibition Aratjara: Art of the first Australians, that opened at the Kunstsammlung Nordrhein-Westfalen, Cologne, and toured to the Louisiana Museum in Humlebaek, Denmark, and the Hayward Gallery in London in 1993-94; the exhibition introduced western Europe to contemporary developments in Aboriginal art. In 2000, the painting featured in Papunya Tula: Genesis and Genius, a watershed exhibition that traced the evolution of the acrylic painting movement that had originated at the settlement of Papunya in 1971: the exhibition was staged at the Art Gallery of New South Wales in Sydney during the Olympic Games. Five Stories was shown again in Europe in Desert Art at the AAMU Museum of Contemporary Aboriginal Art in Utrecht, the Netherlands, in 2002.

At the Sotheby's London auction, Michael Nelson Jagamara's iconic work, Five Stories, 1984, achieved an artist record, and perhaps also a record for the highest price for any living Aboriginal artist, when the work sold for AUD$687,877 (GBP401,000), more than doubling the pre-sale estimate of AUD$256,500-$342,000 (GBP150,000-200,000). The work, offered to auction from the Gabrielle Pizzi Collection, is considered to be the most significant piece of contemporary Aboriginal Art, and is said to be the most published and exhibited work by any Indigenous Australian artist.